San Diego Comic-Con officially starts at this day. I was on my own now since Anna had to go to work. She did not opted for vacation since she's really not into it. I was supposed to go with a friend but he backed out. 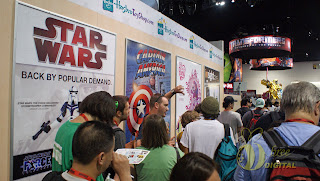 I was already up as early as 2:30 AM. I can't sleep not because I'm excited but I was updating our blog and Flickr. We got everything planned out. Drop Anna at work and I'd go directly to the convention center. I thought that 7:30 AM was early since the doors don't open till past 9. And again I was wrong. Place was already packed and I cant get a decent parking spot. So I settled for Seaport Village which was 7 blocks away. I thought to myself, "What's 7 blocks?! And besides, walking is good". 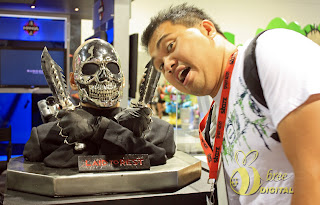 After a few minutes of "walking", I headed right away to Hasbro's ticket booth (You need to avail a ticket to be able to buy any of their items). I was in line for 30 minutes. And again i said to myself, "Ok. Now i got the tickets, and 30 minutes wasn't that long, I guess everything would go smoothly at the booth". And again, I was wrong. I was again in line, and now I stayed there for almost 4 hours.

Since I was there for 4 hours I bought tons of stuff, just to make my time worth while. Which I later realized that I was alone and no one to help me out carry all of these little plastic men. And the hard part is, I had to walk 7 freakin blocks. When I finally got to the car, I was sweating like a thousand pigs. 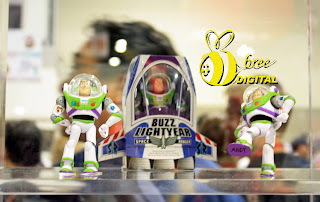 I was too tired to go back and just decided to head home. When I picked Anna from work, she asked me up to what time is the con open, I said till midnight. So she convinced me to go back. Me being a good husband said yes. Hehehe!!! We then arrived at 6PM. I went around and took several pics, while Anna just stayed in a corner and surf the net. After a few minutes, we then heard an announcement saying that the exhibit hall is closing at 7PM. For the nth time, I was wrong again about the closing time.