Last Wednesday, Sharp Chula Vista held it's annual Core Awards. Different departments and notable figures are nominated to recognized the contributions in their chosen field and their community.

I heard the news two days prior to the ceremony that Anna was nominated in one of the categories. It's been long overdue and she deserves it.

On the day itself, I woke up early (around noon, since I'm on the night shift, that's early for me) and readied myself. I'm all set and excited. 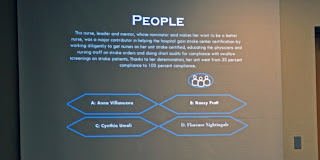 The ceremony was themed after the game show "Who wants to be a millionaire?". The atmosphere was fun. When Anna's category was then presented I was really hoping that she would win, but she was up against with other people who really made a huge impact to other people's lives.

But still, I'm so proud of her. Being nominated is more than enough. And she deserves a pat in the back for a job well done.
Posted by Brian & Anna at Friday, September 04, 2009 No comments:

Email ThisBlogThis!Share to TwitterShare to FacebookShare to Pinterest
Labels: About us
Newer Posts Older Posts Home
Subscribe to: Posts (Atom)