Bumblebee wouldn't be the only one going out on vacation with us anymore. Here's his new buddy, Yotsuba.

I fell in love with this toy when I saw a couple of pics on the net. Plus she really reminds me of Happy.

Since this is a Revoltech figure, it's parts are interchangeable. Which makes it even better.

The only downside to this is, she's only available in Japan/Asia. So I had to resort to Evilbay, ohhh I mean Ebay.

OK, here's the continuation. The rest of Cobra Commander's guests. 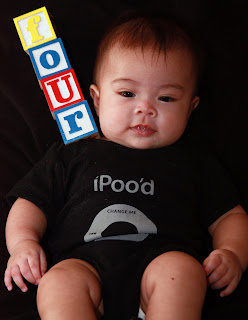 Anna asked me a question this morning. How is it possible to love someone that you hardly ever knew? Barely spent time with and doesn't even have a clue about that person. How can you make sacrifices and expect nothing in return?

"Hey stranger, hello". The exact words that Anna said to Aly when they first met. I on the other hand was just speechless and just cant wait to get my hands on her.

She's now four months old and barely a stranger anymore. But she still surprises us with new tricks from time to time.
Posted by Brian & Anna at Tuesday, May 11, 2010 1 comment:

Email ThisBlogThis!Share to TwitterShare to FacebookShare to Pinterest
Labels: Happy

Was experimenting with my toys, camera and photoshop. And this is what I came up with. A spoof of those late night talk shows, but this one is hosted by Cobra Commander with a different guest(action figures) every episode.

It takes a while to edit one panel. But the hard part would be the script. Here's what I've done so far.

Ok. We're now in the second part which is the technical mambo jumbo of digital photography. Now that the basics are out of the way, we can focus on the important stuff. With everything in tow (given that you were able to acquire all the necessary items from the first part), we're gonna discuss on what settings are appropriate to use in an outdoor setting.

This photo shoot is one of the easiest. It can get tricky, but you don't have to tinker with your camera settings too much. There maybe different brand of cameras out in the market today, but most controls/buttons function just the same.

"P" mode (Program AE)
You'd want to use this mode instead of the full auto. This gives you a "little" bit of control over your camera. Then you'd want to put your ISO to 100 or 200. The smaller the number, the better the picture quality, since this would give you less noise (little grains in your photo). But, if you have moving subjects you can move up to 400 or 800.

Next would be, putting the camera on continuous mode. This is a safety jacket in your part. You might end up with 4 or more images of the same kind, but probably half of them would be blurred. And this would guarantee you at least one good picture.

Exposure would be another important setting that you should not overlook. I took a picture of the LCD of my Canon to point which one is the exposure button (the one where my thumb is) and the exposure meter (the one that's highlighted in blue).

Here are sample pics I took. The one on the left are still unedited and on the right are photoshoped.

You might notice those little icons with the sun, a cloud, a house, etc. This is where you'd want to go auto. To adjust this, the button is located just underneath the exposure button. Switch it to "AWB". This would adjust color temperature of white light. I wouldn't recommend you shooting in this mode, but since you're just starting, this would be the best course for now.

I almost covered most of the important things. Go ahead, and try your camera out. Hopefully, these tips would be able to help you.
Posted by Brian & Anna at Friday, May 07, 2010 3 comments:

Email ThisBlogThis!Share to TwitterShare to FacebookShare to Pinterest
Labels: Gadgets

This entry is a reply to one of my friends asking tips on how to take pictures in an outdoor setting for a pre-nup pictorial.

Since she's just starting out and haven't figured out what the hell she's suppose to do, I'm about to tell her everything I know which is not that much, too.

I've been asked so many times by friends to take pictures of important events and were even offered fee. Yes, as in pay with real money. And not just a $10 gift card from Target or a packed meal from some Filipino restaurant. But sadly I had to turn them down since I do not have proper/necessary equipment to step up and do it. Some funny ones even tell me that it doesn't matter since they know that I have this nice camera that looks really big and professional enough which would translate to good pictures.

There are so many things to consider, especially if you're shooting outdoors. Two hours is definitely not enough. It should be at least half a day. Timing is the key, too. Because believe it or not, this is when you will find out how fast the sun sets. And before you know it, you've just pass a good chance of that perfect lighting when you're already warmed up and so engaged snapping away.

Next, an ideal perfect outdoor setting would either be early morning or hours before sunset or after the rain and it's still overcast. This is due to the harsh lighting of the sun in between. It would be helpful if you would be able to purchase a UV filter which would at least minimize the glare. An external flash would also help. Yes, I know that look on your face and probably asking, what the hell am I supposed to use a flash for? I already have the sun at my side.

Here's why. These pictures were both taken under the shade.

See the difference?
The external flash helped equalize the lighting on the second photo.

Next is the lens. This would be the most important. You probably have the 18-55mm, right? It's good but not good enough since you would probably want to shoot their picture from a good a distance and not just 5-10 feet away. The reason I'm saying this is because they would look and act more naturally, fit in and be comfortable just like any normal day. The goal is for them to forget your presence so that they exude the true chemistry happening and you will capture candid moments that make some shots remarkable.

RAW vs. JPEG... I'd go for JPEG especially if you have limited space in you memory card. RAW files gives you the advantage of flexibility when editing your pictures assuming you're using Photoshop.

Now, I've already told you to buy stuff, and I'm gonna ask you to stretch your spending powers some more. Promise this is the last one. It would be great if you'll be able to purchase a tripod (or monopod) since you'll be moving a lot. This would greatly help minimize "camera shake" which produces blurry, irreparable photos. You won't notice it when you take a quick peek in your LCD because it's too tiny to give details. But once you start editing, you'll be disappointed.

Ok, these are the basics. I would be discussing most of the technical stuff and camera setting on the next entry. If you have questions, ask away. And if it needs further explanation, I will put them on the next entry.
Posted by Brian & Anna at Wednesday, May 05, 2010 1 comment:

Email ThisBlogThis!Share to TwitterShare to FacebookShare to Pinterest
Labels: Gadgets

My other baby girl (Anna) just turned an extra year old again last month. We did nothing out of the ordinary. We just bought "pansit" on the actual day of her birthday (for long life) and went out to eat at the Cheesecake Factory over the weekend.

Mommy had the Spicy Chicken Cashew, while Anna had the Garlic Pasta with so so and the manly me had the meat, which is the Steak Dianne and Salmon. To finish the whole thing off, we had a slice of the Red Velvet that comes with a whopping 15++ calories. Oh man, that's 500 calories divided to three.

Yeah we keep coming back to this place because of the freakish cheesecakes! YUMMYYYY to next level......