Oh yes, it's that time of the year where heroes, villains, monsters, aliens and all that weird stuff gather in one place. It's Comic-Con!!! This time, we get to go for 4 days. 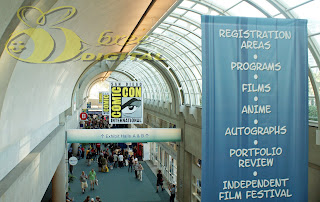 It's my second time around, and I came prepared. I did my research, took my time in checking which booths I'd want to go first and made an estimate of how much moolah would jump out of my wallet.

But me being the cheapskate that I am, told my lead nurse prior the week before, if I can come to work on Tuesday night (my shift was from 11pm to 7am)which was the night before Comic-con. I was thinking, I'd probably have enough sleep before going to the con. But i have totally forgotten about someone from the cable company coming over around 8-10 AM. To make the long story short, while I'm writing down this blog, I've been up for almost 26 hours with just 2 hours of sleep in between. 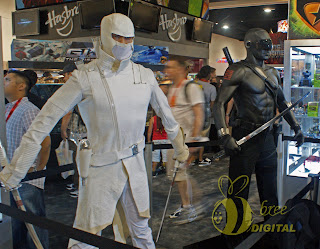 Anyways, this year's Comic-Con was a huge disappointment for me. We bought the 4-Day pass thinkin that there would be less people on preview night. But when we got there at around 6pm, the crowd was already huge. Lucky for us, we were able to get parking at the convention center which was way cheaper compared to the other "pay parking" lots around the area.

And when we got inside, everything was a mess. People are everywhere, the exhibitors in my opinion were overwhelmed with the huge number of attendees. One of the booths that was included in my plan, didn't even had a line to start with. People were just making their way through to the nearest cashier. 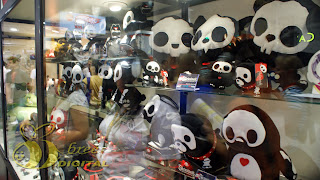 Even though the ensuing chaos was way out of hand. I was still half dazed thinking, I probably died and gone to toy heaven. It never seizes to amaze me, that toys can still have that distinctive allure that affects adults like me. Probably 80% of the people at the con are at the ranges of 18-40 years of age. Which makes you wonder, where are all the kids who are supposed to be the one enjoying these plastic goodies?

With our little one on the way, I'm already thinkin, "What would be a nice costume for our baby in next years Con?".
Posted by Brian & Anna at Wednesday, July 22, 2009