Our one and only AYCE (All You Can Eat) Korean Bbq place in the south, closest to us would be Manna by Southwestern College. It's been years since we last came here and this was the second time. It was not impressive on our first visit considering that a lot of people we know have been raving about it. 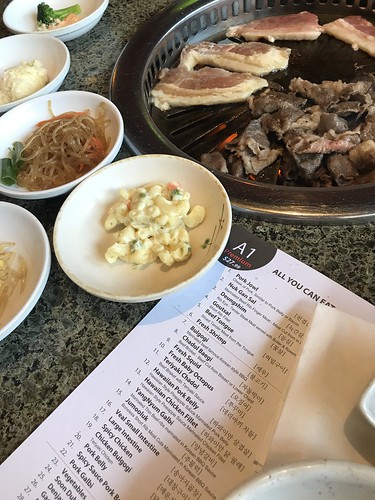 I may not be the best critic when it comes to Korean Bbq, but we've had our fair share of places we've eaten at. And by far, Manna [East Lake] is at the bottom of our list. The only reason we went this time was because I wanted meat and I insisted we go despite Anna's warnings of possible disappointment.  She even added we might as well drive over to Clairemont I really want good meat.  But I wanted to give this place another chance and see if there might be any redeeming factor. 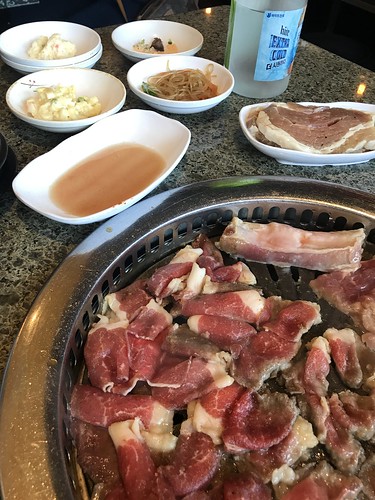 It was a Saturday and normally, K-Bbq restaurants have premium prices on weekends, even during lunch time. Given that, even the cheapskate in me was willing to fork out that much $. Beef brisket is a staple and a popular favorite on our K-Bbq table anywhere we go. But this time, it was a disappointment. What was supposedly described as thin on the menu was thickly cut and naturally became chewy when cooked. Since I was being generous on that day, I ordered another plate of it thinking maybe the first plate I was handed was a fluke.

But fluke it all was. 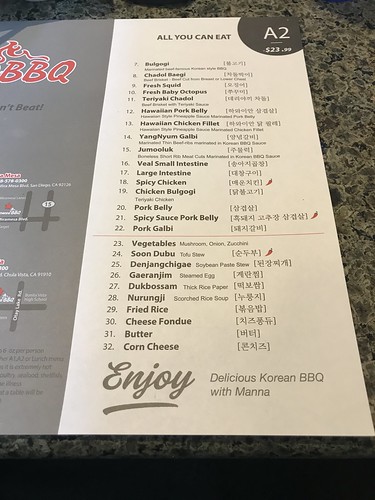 
The rest of the meat were ok.  So-so. But then again, I'd rather drive and be satisfied with the food I eat with  the money I pay for. I would only consider coming back a third (and last) time just because I'd want to go with my food buddies and be able to criticize and prove that Manna should be, and stay for that matter, at the bottom of our list.


Price: 2 out of 5 ($25 per person/lowest tier)
Customer Service: 3.5 out of 5. We had to call somebody to have our grill replaced all the time compared to most of the places we've been to. It's good they have a "ringer" if we need anything instead of waiting for a staff member to pass by.
Food: 3 out of 5. Quality of the meat is as not a good considering their price against other better places we've been to.
Parking: 4  out of 5. There were a lot of parking space. However, even our Mini barely fit in the slot. You'd see a lot of SUV taking up two spots and not judge them.