We're sooooo ready for this. Me and Happy woke up early and prepared for our big day. She's still asking me where is her witch costume. I did want her to dress up but as someone else. Found a really good costume of Goku of Dragonball Z on Amazon and it won't be here 'til Friday.

I was threading on uncharted waters. I have never brought Happy with me by myself but always with Anna. I'm already expecting her to get bored by noon. But this dad is on a mission and have a few tricks up the sleeves. 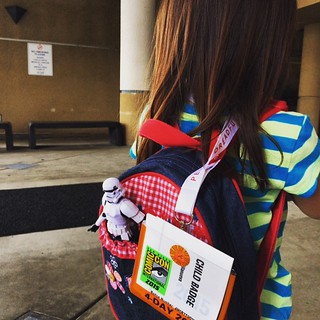 When we got there, I told her that our goal for that day was to collect as much buttons as we can and it worked. We also went to several booths that interest her such as Hasbro's My Lil Pony, Bandai's Dragonball Z, LEGO etc. 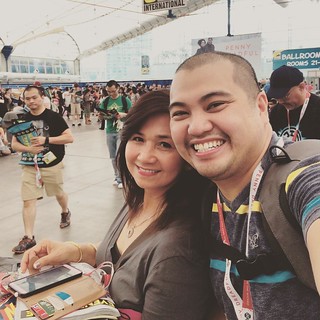 A veteran of Comic-con: Ate Amie
I even got her to fall in line in one of the booths for me for a good 2 hours. The only downside to this was, I wasn't able to take pictures as much. 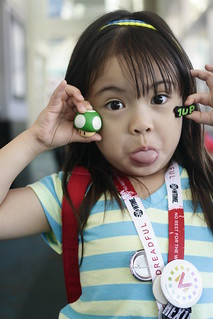 We had a blast even though the place was packed. Was a bit disappointed coz when I asked what she wanted, she told me that she likes Twilight Sparkle from the Hasbro booth, which we all know is always packed with scalpers.... Oooops I meant people.

I explained to her that we'd try on another day but since I had so much fun with her and she did not give me any problem that day, I'll buy her Princes Celestia from the Entertainment Earth booth instead. She's was neither sad nor happy about it, but she then realized that this is better than going home with nothing... smart kid. 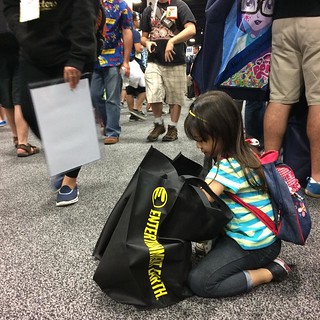